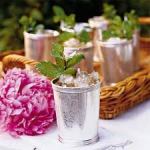 ’Tis said that the gods on Olympus of old
(And who the bright legend profanes with a doubt?)
One night, ’mid their revels, by Bacchus were told
That his last butt of nectar had somehow run out!

But determined to send round the goblet once more
They sued to the fairer immortals for aid
In composing a draught which, till drinking were o’er,
Should cast every wine ever drank in the shade.

Grave Ceres herself blithely yielded her corn,
And the spirit that lives in each amber-hued grain,
And which first had its birth from the dew of the morn,
Was taught to steal out in bright dew-drops again.

Pomona, whose choicest of fruits on the board
Were scattered profusely in every one’s reach,
When called on a tribute to cull from the hoard,
Expressed the mild juice of the delicate peach.

The liquids were mingled while Venus looked on
With glances so fraught with sweet magical power,
That the honey of Hybla, e’en when they were gone,
Has never been missed in the draught from that hour.

Flora, then, from her bosom of fragrancy, shook,
And with roseate fingers pressed down in the bowl,
All dripping and fresh as it came from the brook,
The herb whose aroma should flavor the whole.

The draught was delicious, and loud the acclaim,
Though something seemed wanting for all to bewail,
But Juleps the drink of immortals became,
When Jove himself added a handful of hail.